The views and opinions expressed in these articles and interviews are those of the individuals speaking, and do not necessarily represent those of Applied Metapsychology International.

This article and other similar articles can be found in Beyond Trauma: Conversations on Traumatic Incident Reduction, 2nd Edition available from the bookstore at www.TIRbook.com

It can be easy to forget that every participant in an incident has a completely different point of view of the event. The experiences of 9/11 survivors exhibit this disparity to a great degree, especially those of security personnel and first-responders, people who remained involved for long durations. In this article, I’ll present an overview of some of the unique issues culled from the TIR experiences of various populations. Although this is not a scientific study, I believe that anecdotally it shows the efficacy of TIR.

Another unique characteristic of 9/11 is that therapists and TIR facilitators who treated the victims also in some way experienced the same event. Especially those in the same metropolitan areas, as Kathryn McCormack-Chen points out: “I often wondered if I were next. Usually therapists and TIR facilitators are themselves viewing another person’s trauma as an uninvolved third party. It was both difficult for me to hear these stories unfold and enormously fulfilling because I as the facilitator could do something besides give money”.

Typical first responders such as firemen, policemen, and emergency medical technicians (EMTs) have been trained to handle people and problems of physical trauma, whether dealing with burn victims, triage, or removing the dead. They have been through rigorous training, simulations, and real experiences in the past. Most likely all Pentagon employees and staff would have undergone and planned many disaster drills. However the sheer intensity of 9/11 could never have been predicted. This also included unforeseen threats such as working around live high-voltage transformers in proximity with water.

Duration of the Incident

However, the scope of the incident was much larger than just one event at a single time. For example, first responders handling the Pentagon bombing completed their work only to come home and discover the equally tragic and protracted events in Manhattan. In this sense their normal routine of being able to put the day’s worst behind them was cut off. And coverage continued on every channel of television and radio non-stop for days afterwards. Many felt the need to soldier on, working a second shift with little or no breaks.

Further complicating the cases was the extended duration at each site. At the Pentagon, Secretary Rumsfield ordered people back to work as soon as possible. There would be smoke, water, debris, fuel, and bodies being removed for days and weeks later. Imagine that being your working environment, literally down the hall from you. Similarly, first-responders would toil on in Manhattan for weeks and months, unveiling a steady stream of carnage. 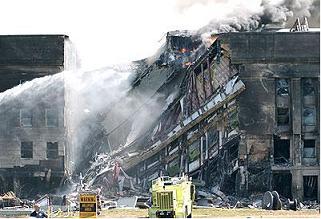 Another complicating factor was the basic issue of personal safety. This represented a completely new phenomenon on American soil. For example, a Vietnam veteran could be secure in knowing that when he returned home he was definitely not in the jungle even though he might still have issues of hyper-vigilance, for example, in reaction to secondary stimuli such as loud noises.

After 9/11, people in New York and D.C., continued to feel as if they were in the target sights, because there’s physically no way out of that “jungle” if you live or work there. In that case, a hyper-vigilant reaction upon hearing a jet plane engine would in some sense reward you for surviving that potential threat. In many other types of incidents, such as witnessing a drowning, the chances of actually experiencing the same phenomenon again are small. However, intrinsic to the threat of terrorism incidents is the possible recurrence of the phenomenon at any time or place.

On 9/11, many first responders in D.C. heard that there were two more airplanes on the way. This meant that while they might feel some success in dealing with the first incident, they felt as if another incident was on the verge of occurring. At that point, the first responders had to continue with their jobs under the added pressure of being under fire by potential further bombings.

Another important factor for some of these people is that the officials decided to rebuild the Pentagon again the same way, with no allowance for any of the windows to open. The original design was to prevent suicide truck bombers, such as in Beirut, but of course that design did not allow for an object to penetrate the entire structure. The element of safety in alleviating past traumas is a relative term here, because these people are just waiting for the next hit to come, with full knowledge that many people could be again be trapped behind non-openable windows in an future incident.

Another result determined from examining these case histories is that even in dealing with an incident as large as this, the weight of earlier traumas must be reconciled. The pain and loss that many people felt was in fact linked to earlier incidents involving totally unrelated areas of life. Some came from dysfunctional families where their parents suffered from mental illness, substance abuse, or both. Other histories contain incidents such as the person having a gun held to his head, her having experienced a car accident, or early sexual abuse.

The difficulty of returning to normal life was exacerbated in those who also had unresolved childhood traumas. This, of course, was on top of going to work with a plane still stuck in the building or the scene of devastation in Manhattan that would last for months. Many first responders would have plenty of incidents prior to 9/11 that went unresolved, its the nature of the job. A typical decision made under such duress might be phrased as “I will never let myself be in a vulnerable position again.” The impetus is towards survival but this solution raises more problems while positing an impossible task. TIR helps viewers unmask and release such intentions when the root incident is successfully addressed.

Can TIR really be effective in the face of the severity of all the aforementioned factors? Consider the case of one viewer (we’ll call her “Mary”) who was a direct eyewitness to one of the crashes. Mary quickly developed many typical PTSD and anxiety symptoms. During waking hours, she would experience flashbacks. At night she experienced loss of sleep punctuated by frequent nightmares.

She lived in constant fear of another attack and her attention was being consumed by these obsessive thoughts. As a result of the sum total of symptoms, she was considering a career change to a position of lesser responsibility to avoid the sense of danger she felt constantly. After only one hour of TIR around the 9/11 incident, she released those symptoms and was able to return to a normal life. Today Mary has taken a job with increased responsibility in a building not far from the original disaster site.

One civilian survivor (we’ll call him “Jack”) who had a desk job but also had first-responder training volunteered to stay and assist after evacuation. He found that by the ability to do something and have a measure of control put off his PTSD symptoms for nearly a year. Jack speaks with detachment of 9/11, except to say that retrospectively, he knows that he slowly began to become more fragile. It wasn’t until one month after the huge anniversary memorial ceremony that Jack’s symptoms became severe to the point of taking a leave of absence. Again, treatment with TIR proved effective and has allowed him the possibility of returning to work.

Other Applied Metapsychology techniques, such as Unblocking (a technique that allows someone to systematically inspect a troublesome aspect or area of life until reaching a satisfying conclusion, or “end point”), were also employed in conjunction with TIR on this population. Unblocking is a technique that makes use of repetition as a means of allowing a client to examine an item or issue from a number of viewpoints from which he or she may, in effect, have blocked comprehension. In Jack’s case, his TIR session became dominated by re-experiencing worry about a potential secondary catastrophe (of which he had special knowledge) which might result in certain death of responders on the scene. Unblocking his responses to the dangerous situation then resulted in his being able to let go of it and complete the incident.

Impact of the Media and Culture

Though we who were not there cannot compare our experience to that of the people who were on the scene during the events of 9/11 and their aftermath, many people suffered a negative impact that day. Trauma counselors I have talked to since then from various areas of the country report clients coming in with new fears and anxieties related to those events even if they didn’t personally know anyone who was injured or killed on that day. Like survivors of the events themselves, these clients often have earlier incidents triggered by the events of 9/11 as well as fears about possible future events. America’s “loss of innocence” comes up frequently as a theme when 9/11 is discussed. The real loss may be loss of the feeling of security and certainly most Americans took for granted before the attacks.

Thematic TIR addresses painful feelings, follows them down to the incident at the root of that feeling and allows the client to let them go. Case histories show that many clients have benefited from Thematic TIR to release the sometimes crippling feelings and fears they had post 9/11. Alertness to potential danger can aid our survival. Crippling fear does not. No matter how reasonable the fear may seem to a person going into a Thematic TIR session, completely viewing it so as to reduce the charge and resistance to is results in a viewer who is free from the negative influences of the past incidents so viewed and able to be more alert, comfortable and effective in his or her environment.

Marian Volkman and other have found that fears for the future are best addressed with Future TIR (taught in the TIR – Expanded Applications Workshop). She reports having used more Future TIR than anything else in addressing post 9/11 symptoms. As an example, one client (“Susan”) was plagued by both vague and specific fears for the future especially concerning the well-being of her children. After one session of Future TIR of slightly more than one hour in which the client addressed every negative scenario she could imagine, she was able to live without these worries hounding her and able to enjoy life again.
Go to top