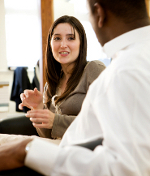 From a client’s point of view, the work begins by meeting with a practitioner (facilitator) for an intake interview. From the information gathered in this interview, the facilitator makes a plan to address the issues of concern to the client (viewer). Some viewers come in with their attention on one particular traumatic event, maybe a recent one, which can be effectively addressed using Traumatic Incident Reduction. Ideally, the viewer and facilitator have the opportunity to do a complete Life Stress Reduction Program, designed specifically to meet the needs of that viewer.

Freud once said that the purpose of psychotherapy was to take people from “hysterical misery to normal unhappiness”. The first stage of Applied Metapsychology work (including Traumatic Incident Reduction and Life Stress Reduction) is designed to take people from anywhere on the scale of “hysterical misery – normal human unhappiness” to a point of satisfaction and resolution.

When It In Not Advisable to Use Applied Metapsychology: